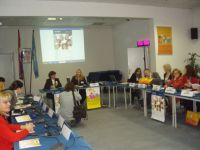 Representatives of ombudspersons took part in the conference from Bosnia and Herzegovina, the Republic of Srpska, Montenegro, Greece, Croatia, Kosovo, Romania, Slovenia, Serbia and the Autonomous Province of Vojvodina. The introductory messages were given by the Croatian Ombudsperson for Children, Mila Jelavić, as this year’s coordinator of the Network, and Ahmed Pjano, Programme Manager of Save the Children Norway SEE.

Mila Jelavić pointed out the importance of the ombudsperson’s involvement in affirming the position of children as subjects and holders of rights, in contrast to the mainly passive role which society usually gives them, treating them as objects of adult protection. Ahmed Pjano analysed the experience of ombudspersons for children in South and Eastern Europe in the area of establishing communication with children. Children must have as many opportunities as possible to meet with their ombudspersons, talk to them about their lives and bring them their complaints and suggestions directly. Therefore, it is important for the offices of ombudspersons to be open to children, and initiatives to found children’s councils or groups which function as advisory bodies to the ombudsperson are particularly valuable. He emphasised how important it is to find a way to enable younger children to express their views and standpoints on various aspects of their lives, and so realise their right to participate as members of the social community.

Examples of practical realisation of children’s right to participate, with the unavoidable problems and misunderstandings, but also promising models, were then presented by representatives of the ombudspersons for children: Nataša Jović from Serbia, Marija Kordić from Vojvodina and Nada Grahovac from the Republic of Srpska, emphasising the importance of sensitising and educating all adults, and especially teachers, social workers and all professionals who work with children.

An interesting model of inclusion of young people in the work of the ombudsperson, through the foundation of an advisory youth panel composed of 30 children aged from 13 to 17 years, was presented by the representative of the Greek ombudsperson, Niki Bafa. Tone Dolčič presented the activities through which attempts are being made in Slovenia to increase the presence and influence of children in public life, including visits to Parliament, and Ester Radmilo, from the Croatian Office of the Ombudsperson for Children, presented the work of the children’s consultative group, whose suggestions and requests, with the support of the children’s ombudsperson and her mediation and animation of members of the professional community, were in the end included in the Vocational Education Act.

What the ombudsperson or ombudsman for children should do to encourage children to participate and contribute to expanding the possibilities of their active and effective participation in decision-making in school or the local community, was the intriguing subject of discussion, in which almost all the guests at the conference took part. To ensure participation and realisation of all children’s rights, it is necessary to inform and empower children. But knowledge and skills alone are not enough, without the readiness of adults to accept them as subjects and holders of rights, it was concluded. The decisive step is sensitising adults, raising their awareness and finally pointing out to them their legal obligation to respect children’s views in making decisions on issues that relate to them.

In the final part of the conference there was discussion of plans for the future work of CRONSEE. It was agreed that next year the Network co-ordinator will be Nada Grahovac, the children’s ombudsperson of the Republic of Srpska.